St Wilfrid’s Church has some strange mysteries.  One of these is an alabaster effigy set in the south wall of the church.  This effigy was hidden behind the organ for 110 years and until 2006 many members of the congregation didn’t know he existed.  It is true that he was a little dirty and that someone – probably during the reformation, cut off  the faces of the angels that support his head.  They also did something nasty to his nose. But, we now know that he is very special.

We have been told by Sally Badham, Vice President of the Church Monuments Society, that he is possibly the oldest alabaster effigy of a priest in the country.  She says that the way the sculptor has carved the drapery of the cloak on both the front and the sides is most unusual.

Although the church is close to Chellaston, he is probably carved from Tutbury alabaster. The mines at Chellaston didn’t open until 1374 and all the research points to him having been carved in the 1340s. Our history researchers have spent a long time trying to find out more about him and we think we know who he is. He would appear to be a priest named John de Belton from Crayke, North Yorkshire, who was appointed by the Knights Hospitallers to work in Barrow upon Trent in 1343. He remained in post until 1349. 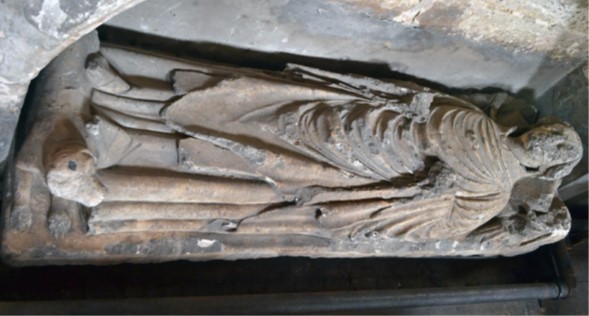 We are grateful to Sally Badham for the following comments:

He has now been beautifully conserved and the remarkable carvings can now be clearly seen. 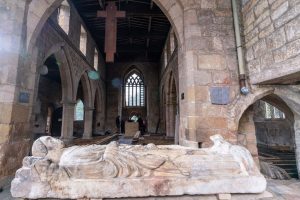