An early alabaster Effigy – is this the oldest of its kind?

The effigy of a priest in St Wilfrid’s was a prime subject for conservation and research.  Having learnt that the effigy was possibly the oldest known alabaster effigy of a priest in the country, we decided to call in a well-known firm of conservators, Skillingtons, and under the care of Dr David Carrington, and Laura Parker, the effigy was removed from its niche, cleaned, conserved, cracks and fissures made stable and made ready for reinstatement in its niche once the church transformation had been completed. 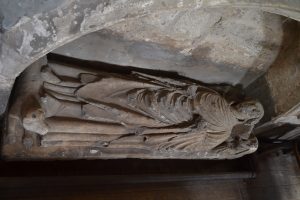 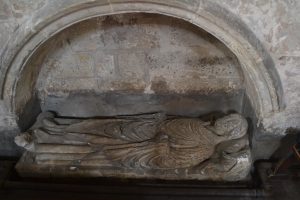 The effigy of a priest with a dog at his feet is located in the south wall of the south aisle of the church.  Having been there for nearly 700 years, and hidden behind box pews and subsequently the pipe organ when that was installed in the church in 1892, he was dirty and neglected.

The organ was moved out of the church in 2006, leaving the effigy exposed.  His neglected state was obvious to all, and the decision was made to investigate him further, and to raise the funds to have the effigy cleaned and properly conserved. 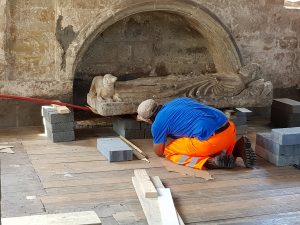 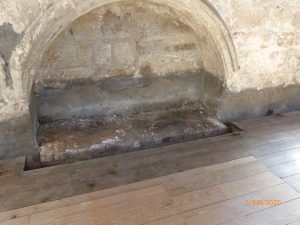 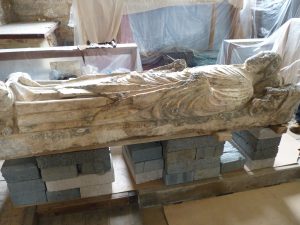 When taken from its niche, it was dirty and in need of much tender care. During the conservation it was carefully cleaned, and a very old repair to the head of the dog which had in the past been broken and put back on at an incorrect angle, was fixed. He now looks ahead correctly.

As you will read in the heritage part of our website, we believe the effigy is of a priest called John de Belton who came from Crayke near Durham at the behest of the Knights Hospitallers, to oversee the erection of the south aisle to the church in 1342. He disappeared from the roll of parish vicars in 1348 – perhaps a victim of the Black Death? 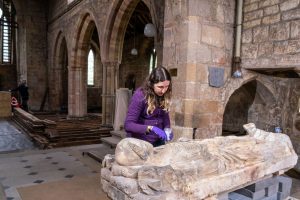 In addition to the conservation and cleaning, various remnants of mediaeval paint and coloured patterns were discovered during the process. A specialist analyst company, Crick-Smith, were commissioned to take special samples for analysis. These were tested under an electron microscope, and the results show that the paint samples are of gold, azurite, cinnabar and other exotic materials from lands far away from Barrow.  The rendering of the effigy is also particularly fine.

He must have been a very important person to warrant having such expensive and decorative adornment. 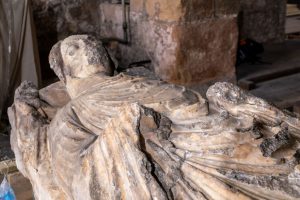 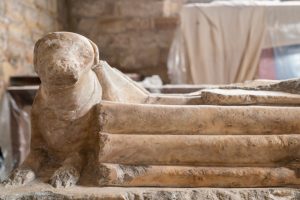 The effigy has now been reinstated in the niche, with the addition of a low-level mirror to enable visitors to see him from both sides. 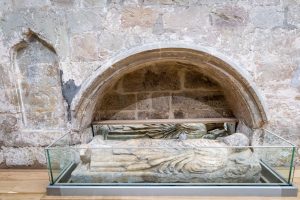 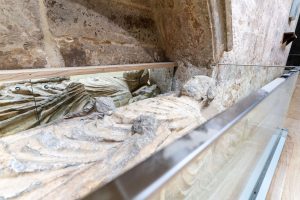 One thought on “An early alabaster Effigy – is this the oldest of its kind?”