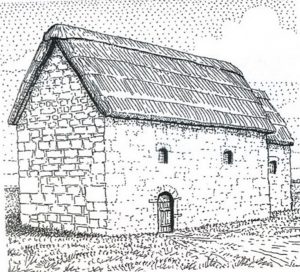 At St Wilfrid’s, the wall between the main body of the church (the Nave) and the smaller ‘religious’ section (the Chancel) is still standing today.  Part of the chancel itself fell down in medieval times but unfortunately we don’t know when.

Looking up towards the roof it is possible to see the earlier roof line before the ‘clerestory’ (upper part of the nave) was added in the 15th Century.  The church would therefore have appeared as a very tall thin building looking out towards the River Trent: 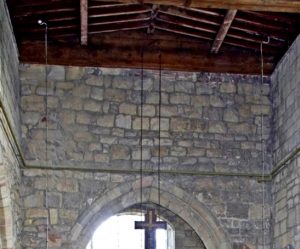 This picture, taken when the chancel roof was repaired shows the earlier roof line outside as well! 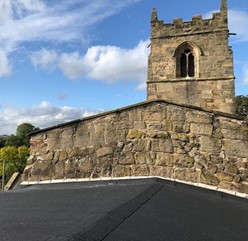 Only one church of an early date has been professionally excavated in Derbyshire – St Alkmund’s Derby (possibly late 7th early 8th century) and its foundation measurements are the same as the measurements of the nave of St Wilfrid’s: – 44ft by 19ft.  No Derbyshire churches would have been larger at this time. (G. Turbutt)

See www.derbytelegraph.co.uk/news/nostalgia/gallery/stunning-photos-chart-dramatic-demolition-2645132 for more about what happened to that church.